Baturday News is a weekly blog written by Rachael, a 6th grade student and Save Lucy volunteer. Rachael’s interest in bats was sparked by the big browns bats that use the outside of her home for a winter roost. Her family has cheerfully hosted this wild colony for years. This week we feature a new drawing by volunteer illustrator E. Wright 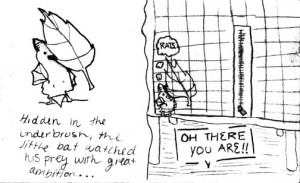 Hi everyone! It’s been an interesting week for the bats of the world. It’s still much too hot for them in Australia. The last I heard, more than 100,000 of them had died because of the heat wave. A little closer to home, I think our bats must be confused. One day it’s ridiculously cold and a few days later it’s 50 degrees. If I were a bat, I wouldn’t know what to do with myself.
I read an interesting article on bats. It was called ScienceShot: Bats Tune Into the Emotions of Others. Please go read it here. I think you’ll LOVE the picture. Scientists did an experiment that showed that bats can understand how other bats feel. I liked the article, but I wonder why they had to prove this. I think anyone who has ever really watched bats could probably have already told them that. Bats are a lot smarter than people think.

4 Replies to “An Interesting Week”

I just read the article (the link didn’t work, but mom searched for it). Cool!

Thanks for letting us know about the link. We fixed it!

I’m glad you liked the article. I’m sorry the link didn’t work. I thought the picture was adorable.