Baturday News is a weekly blog written by Rachael, a middle school student and Save Lucy volunteer. Rachael’s interest in bats was sparked by the big brown bats that used the outside of her former home for a winter roost. Her family cheerfully hosted the wild colony for years. 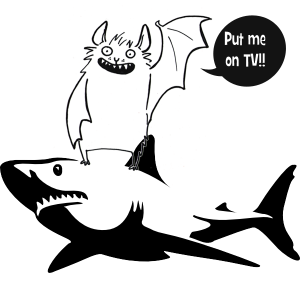 Hi everyone! I hope you had a nice week! My week started off with final exams, but then the most glorious thing of all happened! The LAST DAY OF SCHOOL was Thursday!!! I do not need to go back to school until September! Isn’t that just wonderful??? I’m sure you all are as happy as I am that it’s summer.

I just realized that I started writing this blog when I was in the 6th grade and now I am officially in high school! We’ve been through so much together. And now, we need to get through another Shark Week. If we’re strong, I know we can do it. While everyone is celebrating sharks, we can secretly celebrate bats and know in our hearts that they are so much better than an oversized fish. On that note, let’s compare the two. Shall we?

Sharks:  Have a flavor of ice cream topped with these gummy candies devoted to them at Cold Stone Creamery!
Bats:  Once again, nothing so wonderful has yet happened to a bat!

So, in conclusion, I am once again saddened to report that although bats are much better creatures than sharks, they are not getting the recognition they deserve! Does anyone out there know how to fix this problem? I am open to any suggestions. Does anyone out there share my outrage and conveniently work at for a major ice cream company? Perhaps you could speak with your corporate executives before Bat Week??? I’m sure they’d love to hear from you! Anyone willing to help? Our furry little friends are anxiously waiting to hear the results of this campaign!

One Reply to “Bats vs. Sharks”