Where have we been?? 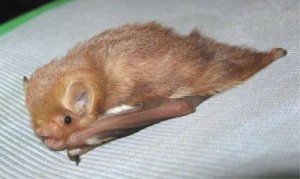 It’s been a long time since we updated Lucy’s blog, and we apologize. Spring and summer are very busy times for some bat people, especially bat rehabilitators. In the mid-Atlantic, where Save Lucy headquarters is located, bats start pupping (having babies) in late May and through June. Unfortuntately, baby bats sometimes fall from the colony, or the entire colony is disturbed by a predator, which causes pups to fall. Usually mother bats rescue their pups after dark, but if something has happened to the mother or the colony abandons a roost site, pups become orphaned. Caring people who find orphan bats bring them to bat rehabilitators, who care for the orphans until they’re old enough to be released to the wild. Please enjoy this picture of a rescued eastern red bat in Oklahoma. Our friend, Carol Bunyard, sent the picture. She is taking care of ‘Junior’s’ mother and is helping the mother remain strong enough to raise Junior.