Baturday News is a weekly blog written by Rachael, a 6th grade student and Save Lucy volunteer. Rachael’s interest in bats was sparked by the big browns bats that use the outside of her home for a winter roost. Her family has cheerfully hosted this wild colony for years.

Hello Everyone! Since it was very nice weather last weekend, a lot of the rehabilitated bats were released back into the wild. A hoary bat, two silver haired bats and six big brown bats were released. I hope they are happy and have been able to find some new friends out there. We had a lot of rain on Wednesday, so hopefully they were all ok. I am very happy to report that little “Paint Can” was one of the bats released. Remember him? He is happily flying free.

Here are some cute pictures of some bats that were released. 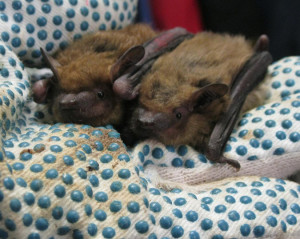 Paint Can, a bat that had been put into a can with wet paint still in it, on left and his new friend just before release. Photo by S. Craig

One Reply to “Into the Wild!!”