Baturday News is a weekly blog written by Rachael, a middle school student and Save Lucy volunteer. Rachael’s interest in bats was sparked by the big brown bats that used the outside of her former home for a winter roost. Her family cheerfully hosted the wild colony for years.

I would like to dedicate this week’s blog to a boy who passed away this week. He went to my school and although I didn’t know him personally, I knew of him. My sister knew him and said he was a very kind and caring person and everyone is very sad. So, Daniel, this is for you. You will be missed.

Hi everyone! I hope everyone has been enjoying Bat Week! Happy Halloween! Remember to be safe tonight while trick or treating. 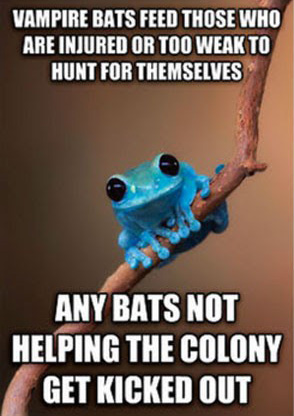 Someone sent me a cute picture this week and I thought I’d share it with you. I’m sorry, I don’t know the original source of this, but apparently Small Fact Frog is full of wonderful knowledge that he occasionally shares with people on the internet. This time, he shared a batty fact that I think shows just how awesome and amazing bats can be.

And now, since it is Halloween, Brownie the bat (remember him?) wanted to write a story about his costume.

Brownie was really happy, tonight was Halloween. His favorite costume of all was when he went as a human, but he wanted to be something else this year and couldn’t decide what. He was flapping home from school one night while thinking about this dilemma. He landed in his cave and put his school stuff down. He remembered having a box full of costumes in his room and rushed up the stairs to look inside it. He flipped open the box and looked inside. A human again? No, he wanted to be something different.  A butterfly? No. A dog? No. A cat? No, it would be too scary. He didn’t want to frighten his fellow bats. Hmmm… He looked under all of the stuff but he couldn’t find anything he wanted to be. That’s when his best friend Tom came flapping in.

“Hi Brownie! What are you doing?” Tom asked him.

“Oh nothing I was just looking for a costume to wear tonight for Halloween. Got any ideas?”

“Hmmm… Well I am going as Robin from Batman and Robin, maybe you could be Batman.” Tom replied.

Brownie thought about it. Batman was his favorite superhero. “That’s a great idea! Thanks!” Brownie said. Then Brownie looked at the mess he had made when he was emptying the box. “But maybe you could help me clean this up?” Brownie asked Tom.

Brownie and Tom cleaned up the costume mess and put the box away. Then Tom flapped off to get their costumes from his cave. Luckily, Tom had a Batman costume already. Brownie waited, and waited, and waited, until finally his friend came flapping back. They got into their costumes and flapped outside to show all of their friends. As they were flying they looked down to see a whole bunch of humans walking around trick or treating. He loved Halloween!

Brownie loved seeing all the interesting things that the humans dressed up as. He saw one human dressed as a bat and thought that was funny. He didn’t think the human really looked like a bat. For one thing, he wasn’t flying around. Then he and Tom saw some humans dressed as Batman and Robin! That was just awesome! Apparently, humans like Batman and Robin too! Maybe human children weren’t so scary after all.

After they flapped around looking at the humans for a while, Brownie and Tom went trick-or-treating themselves. They got lots and lots of wonderful treats! Their favorites were the juicy, crunchy mealworms. YUM!!! They couldn’t wait to get home and eat some. 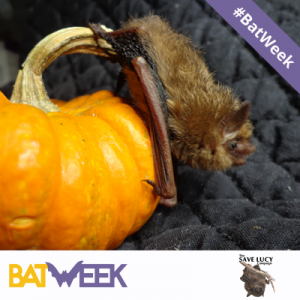 I hope everyone enjoys their Halloween! And don’t forget to build those bat homes if you have a chance today! We’re trying to get a world record.