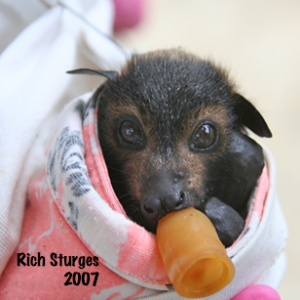 Hi everyone! I hope you all had a good week. While things here have been wintery (although not too bad in the DC area), things in Australia have been horribly hot. It’s summer down there now and they have been having a terrible heat wave. It has caused “bushfires,” which are like forest fires, but they are in the Australian bush land. The heat has also caused a lot of problems for the bats.

Australia has beautiful bats called flying foxes. Compared to our bats, these bats are huge! They mostly eat fruit, but they also feed on pollen and flowers. These bats don’t rely on echolocation to find their food. They make calling sounds that humans can hear. I have been told that flying fox colonies can be very loud. It must be an amazing thing to see and hear!

Because of the Australian heat wave, thousands of flying foxes have died in Australia. Many of these bats were nursing mothers. Bat rescue organizations have been desperately working to save these babies. One organization runs an amazing Youtube channel for Batzilla the Bat. Here, you can see a lot of videos of the absolutely adorable flying fox pups that they are saving. Batzilla’s people are very nice and they have allowed me to share this video with you.  It is of a little black flying fox pup and is quite possibly the most adorable thing you will see today.

It must be very difficult and depressing work for the bat rescuers in Australia right now. I would like to thank them for sharing the joy of their pups with us. And I ask everyone to please send positive and happy thoughts their way.