Some GREAT news, and some sad news…

Baturday News is a weekly blog written by Rachael, a high school student, bat advocate, and Save Lucy volunteer. Rachael’s interest in bats was sparked by the big brown bats that used the outside of her former home for a winter roost.

Today’s blog is dedicated to the people of London, England. I hope the injured recover quickly and that the people who lost loved ones find peace.
Hi everyone! I hope you all had a good week. After hearing the news about what happened in London, I thought it would be nice to research a cute little English bat this week. I have good news! The gray long-eared bat has been found roosting in East Devon, England. East Devon is about 160 miles southwest of London. The gray long-eared bat is rare in the United Kingdom, so this is very good news. The bats were found when the staff of an ecology company were doing a building survey. They found other bats there too, including the serotine and brown long-eared bats. If you would like to read more about this discovery, you can read about it here. 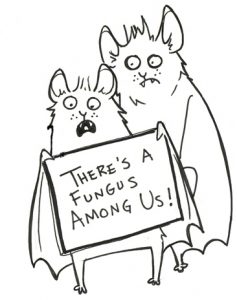 And now, I have some sad news. The fungus that causes White-nose Syndrome has been found in Texas. It was found on the cave myotis, Townsend’s big-eared, and the tri-colored bats. This is the first time that the fungus has been found on cave myotis bats and on the western populations of Townsend’s big-eared bats. Texas has 32 different bat species living in the state and has two very well-known Mexican free-tailed bat colonies: at the Ann W. Richards Congress Ave Bridge in Austin and at Bracken Cave. Since Mexican free-tailed bats don’t hibernate all winter, scientist are hoping that they won’t be as badly affected as other bats.
The news in Texas came one week after WNS was found in Nebraska. There are now 33 states with the fungus and 30 states with confirmed cases of White-nose Syndrome. If you would like to read more, you can find information here:.

PREVIOUSNEXT
My what cute whiskers you have!An interesting perspective on trees and habitats