Happy, then sad, then happy wishes 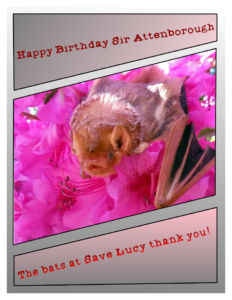 Hi everyone! I hope you all had a good week! I would like to wish Sir David Attenborough a very happy birthday. His birthday was earlier this week. He is famous for his work in broadcasting, specifically his wonderful nature shows. He did a few shows on bats and they were all amazing!

Now, I am afraid I have some bad news. Some of you may have already seen this on Save Lucy’s Facebook page earlier in the week, but I thought it was so important that it should be mentioned again. A second bat has been found with White Nose Syndrome in Washington state. The bat was found last month in King County, WA. They identified the bat as a Yuma myotis.

Yuma myotis is a common bat in the western United States. Since we don’t have them in the east, I wanted to know more about them. They are quite cute (but really, what bat isn’t?). Depending on where they live, they are different colors. Some are dark brown and some are tan. Their fur is short and dull and they have pale fur on their tummies. This is the first time that WNS has been found in a Yuma myotis bat.

I hope everyone has a very Happy Mother’s Day! And I hope you all have a good week! 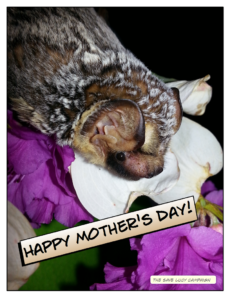 PREVIOUSNEXT
An exciting guest!Why sir, you are mistaken, I am not one species, but two!

One Reply to “Happy, then sad, then happy wishes”

I’m very happy to read your blog, I also love bats. Was wondering if your going to work with scientist or become one, your smart and caring about bats. I am very interested in bat and have read many books on them. So just what are your plans about bats. Are you going more in the field of bats or stay doing this when you get older. I wish I new about this when I was younger. So good luck with your dream.