Such a far reaching fungus 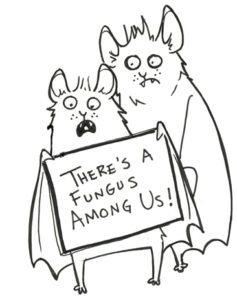 Hi everyone! I hope you all had a good week! I’ve been busy with school. It’s almost summer vacation! I can’t wait. I only have two more weeks!!!

I have some sad news about bats. The fungus that causes White Nose Syndrome has struck again in a new state. Until recently, the state of Wyoming had been Pseudogymnoascus destructans (Pd) fungus free. But, now researchers working at Fort Laramie National Historic Site have detected the fungus. With this discovery, the fungus has been found in a total of 32 states and 7 Canadian provinces since it was first discovered in New York in 2006. The fact that the fungus was found does not mean that the bat has WNS. Further testing is needed to see if the bat is actually sick, but since the fungus has been found in Wyoming, scientists can now say with certainty that the terrible disease that is WNS is continuing to spread across North America.

If you would like to read more about this very sad news, you can find information here. [WNS was also discovered on a new species in Kansas and Pd was found in South Dakota for the first time. Keep up with all things WNS, including useful maps at www.whitenosesyndrome.org. –Ed.]

I hope you all have a good week.