“How are you?” Ms. Wing said. “Let’s see, one canary and one person. Here, why don’t each of you pick what you want for your treat.”
“I WANT THE MOTH!!!” each of them shouted.
“There are enough moths for each of you. Here, take two,” said Ms. Wing.

“Thank you! Let’s go to the next cave,” Stella said.

“TRICK OR TREAT!” they both said. “Oh, boy! You have BEETLES! I LOVE BEETLES!” Then they looked at the bat who had answered the door. He was dressed up as a cowboy! “Howdy, partners. Let’s see what we have here. A mighty fine looking canary. And, what are you supposed to be? I’ve seen your kind around these parts. Are you one of them scary people? Why don’t you take some of these here beetles? Be careful, they’re still alive,” said the cowboy. 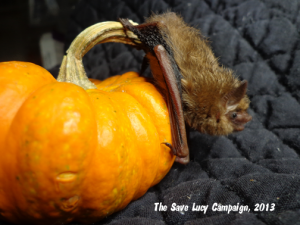 “Thank you!” both little bats said. They went from cave to cave collecting yummy insects until Brownie stopped in mid-flight.

Stella said, “What’s wrong, Brownie?”
“That’s the human I was telling you about! He’s my costume. I dressed up like him.”
“Oh, hey look at him! He’s you! He’s dressed like a BAT!” Stella said. “Those are really weird looking bugs in his bag! I wonder what they are.”

Brownie was getting tired. “Why don’t we go rest over there on that tree,” he said. “Stella…I want to eat a beetle.”
“Me too,” she said.

“How are you two doing?” their moms said.
“Hi mom!” they both said. “Can we eat a beetle now?”
“Yes, it will be your dinner,” both moms said at the same time.

After they rested for a while, Stella’s mom said, “We should go home now. It’s almost sunrise.” So, all four bats flew home carrying some yummy treats.
Brownie and Stella were exhausted. It had been an exciting night.

One Reply to “Brownie’s Halloween Part 2”