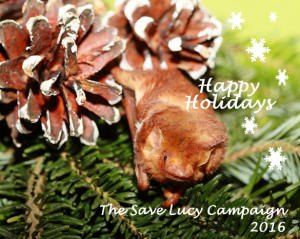 Hi everyone! I hope you all had a good week! I am very excited about tomorrow. Tomorrow is an extra special day because both Christmas and the first day of Hanukkah fall on the same day. This is only the 4th time since the year 1900 that this has happened! In honor of this very special occasion, I found an article about a bat research project in Israel.

The article is about a study done on how bats communicate with each other. A group of researchers from Tel Aviv University studied Egyptian fruit bats for 75 days. They studied the bats’ squeaks and how the noises affected the bats’ movements. They discovered that when bats make certain noises, the other bats responded in a certain way. They also noticed that bats change their tone when they are talking to members of the opposite gender. The scientists still have a lot of work to do. They would like to find out if the vocalizations are something bats are born with or if they learn them as they grow. I think they should have a look at little Freda. She has been with Save Lucy since she was a very young little pup and she vocalizes quite nicely…and often. If you would like to read more, you can find the article here.

I hope everyone has a very Merry Christmas and Happy Hanukkah! May this holiday week bring everyone peace, joy and happiness. I hope people are able to put their differences aside for a while and that the world will see peace in honor of the holidays.

PREVIOUSNEXT
Good St. Nick, please leave a bat for us one and all2016, Not So Bad After All!