Hi everyone! I hope you all had a good week. As you all know, we said good-bye to some very memorable people this week. On Tuesday, Carrie Fisher (Princess Leia) passed away. Her mother, Debbie Reynolds, passed away the next day. They say she died of a broken heart. It’s very sad. We also said good-bye to a singer, George Michael. He was a famous singer in the 1980s.

Since a lot of people are talking about how difficult a year 2016 was, I thought it would be nice to remember the good things that happened. So, while I agree, there were definitely some things that I wish hadn’t happened, there was some good as well…

We started the year off with a huge blizzard! I know some of you might not think that is such a glorious thing, but that is because you aren’t in school. If you were in school, you would agree that a blizzard is a fantastically glorious thing to experience. While we were in the midst of the blizzard, we met a beautiful Hoary bat named Blizzard. She stayed with Save Lucy for a while and then, when she was feeling better, she rejoined her friends in the wild. 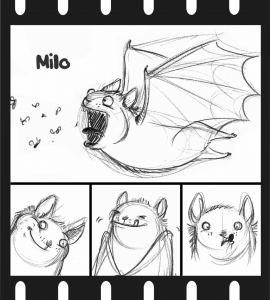 Next, we met Reggie and his friends. These little bats became great stars with their movies, “Very Scary”, “Settle Down”, and “Om Nom Nom”. While we are still waiting to hear what the Oscar committee has to say, these little friends are very talented and will always hold a place in our hearts.

In April, we learned that winter populations of some hibernating bats had begun to stabilize. We also celebrated Bat Appreciation Day and Earth Day. Probably the most spectacular thing that happened in April was when Mrs. Sturges, my amazing mentor, gave me the most wonderful gift I could have ever hoped for. That’s right. I got my amazing bat coat!

During the summer, we experienced another baby bat season. This was when we met an adorable little boy named Harold. Sadly, Harold didn’t live long, but while he was with us, he filled our lives with joy. We also met some Evening bats named Wiggles and Shroom. Together, we learned that Evening bats smell like mushrooms!

As the summer came to a close, we watched the Olympic Games in Rio de Janiero. It was nice to see the world come together for these games. It was also nice to learn about some bats from places around the world. 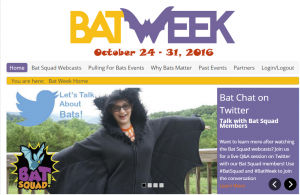 October was a big month for me and for bats. We celebrated Bat Appreciation Month. The month was finished off with Bat Appreciation Week. This spectacular week was when I became fabulously famous! Being a member of Bat Squad was an amazing experience. It was an experience I will never forget!

In November, we learned something that little Freda probably already knew. We learned that Brazilian Free-Tailed bats are the fastest vertebrate fliers. Congratulations little Freda!

We finished off the year with news from Arkansas. Almost 1,500 acres of forest were turned into a nature preserve. This forest is home to three protected bat species. Some more good news that we received at the end of the year came from children’s book author, Rob Laidlaw. He is writing a book about bats and is planning on including me in the book! This is an absolutely amazing honor!

So, while 2016 might not have been the year we all hoped it would be, it wasn’t a total disaster. I hope that 2017 turns out to be a happy and healthy year for you all and for little bats everywhere.