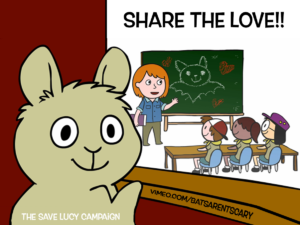 Hi everyone! I hope you all had a good week! Mine was pretty good. I had to do a one-minute speech in my government class. We were supposed to act like we were talking to Congress and were trying to persuade them to fund our project. Well, of course, my speech was to ask Congress for more funding to find a cure for White Nose Syndrome. I got an A!!!

And now for the truly exciting news! A new Bats Aren’t Scary video was released on Friday. This one is titled “A Change of Heart” and stars a handsome little bat named Delbert. It also stars a human named Shelly. Shelly meets little Delbert and is scared. Thanks to some absolutely amazing acting by little Delbert, Shelly has a change of heart and decides that maybe bats aren’t scary at all. I don’t want to ruin it for you. You need to watch the video yourself. But I will tell you that Shelly not only changes her mind about bats, but she also educates others about how awesome bats are.

I really do believe that little Delbert could win some awards for this performance. I mean, really, there is a little bit of everything in this film. There is his graceful flying, his expressive scream of fright, and the last scene…amazing! And while I am discussing the acting in this video, let’s discuss Shelly. For a human, she does a wonderful job. She might be a contender for Best Supporting Actress!

And now, without further ado, please watch the video for yourself. I hope you enjoy it as much as I did.

If you would like to watch it over and over again, you can find it here and here. All the Bats Aren’t Scary videos are free for anyone to use–just click the share icon on the video!

PREVIOUSNEXT
A Thanksgiving StoryPants with pockets, and a tail!