Hi everyone! I hope you all had a good week. I am excited because it is almost Christmas!!! I love Christmas! I have been eating so many Christmas cookies that we need to make more to give to our neighbors! I learned an interesting Christmas fact the other day. In Australia, Santa’s sleigh isn’t pulled by reindeer. It’s pulled by kangaroos! I think it’s totally awesome of the kangaroos to give the reindeer a break for a little while. I’m sure that after flying around so much of the world, they are tired and appreciate the help of those kangaroos.

Since the kangaroos are so helpful, I thought I’d look up some bats from Australia. You know I just love the little bat burritos down in Australia, but I found another adorable bat to talk about this week. It’s called the Chocolate Wattled Bat. It has chocolate brown fur on its back, and light brown fur on its stomach. It has a lobe on its lower lip that looks a little like a wattle. This bat also has the most adorable little nose. Its nose looks a lot like a pug dog’s nose! I have a pug dog, so I really like this bat’s nose. ?

Chocolate Wattled bats eat a lot of insects. They really like chewing on moths. These cute little creatures live in the southern parts of Australia and in Tasmania. They are very common in Victoria, Australia. They live in forests, woodlands, and in farm areas. These bats also like to roost in tree hollows and in buildings. Their colonies are made up of 10 to 20 bats.

If you would like to learn more about these adorable little Australian bats, you can find information here.

I hope everyone has a very Merry Christmas! 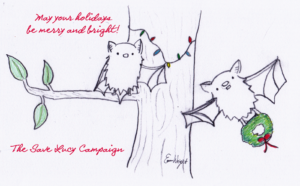 PREVIOUSNEXT
Up with the Resistance!And a Happy New Year!

I love reading the Baturday News – thank you for all your informative and fun bat posts! Have a wonderful Christmas 🙂